We are continuing to prepare for our Christmas Celebration, but we are struggling with lots of hindrances.  We made arrangements to rent a large hall, and they promised we could use it.  However, just last week the owner of the hall called me and asked to meet with me.  He said, “I got a phone call from the higher authorities, and they said they didn’t want us to rent the hall to you.”  After a long conversation we were able to persuade him to let us continue our plans.

We’ve rented an electric bulletin board and paid for it.  Three days the population was able to see the announcement.  Then ones in charge told us that we could no longer show that advertisement any more.  They said that too many phone calls were coming to them of people who were uncomfortable with our announcement.   People were even calling the city council complaining about it.  So the command to stop that announcement from being shown came from the city council office.   So that was taken away from us.

We also put up some advertisements on billboards.  However, they were torn off every day which we noticed.  So the company put a new one up each day, only to find it torn again, which costs us money, of course.

We also printed out 10,000 brochures to hand out to the public.  We’ve had a hard time finding groups of people who will help us hand these out.  And each time we’ve attempted, we’ve been forbidden by the officials to hand these out on the street.

It’s obvious that we’re in a very hard spiritual battle this year.   We really need your prayers.  One sister praying for us prayed this way, “Lord, just as all the animals that entered Noah’s Ark were called just in time, may many be called to come to our Christmas Celebration.”

We are praying that those who are truly searching for our Lord come to the December 25th evening Celebration.

I’m sending our electrical announcement for you to see as a video.  The billboard announcements are in a separate attachment.

Will you continue in prayer with us? 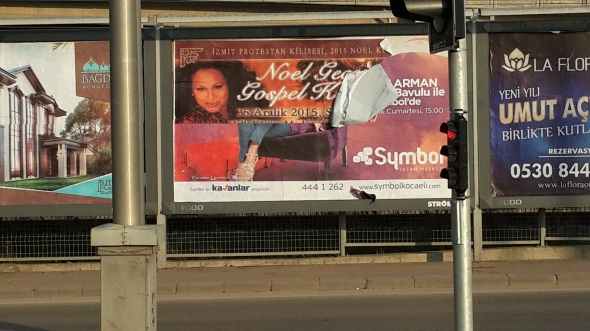